What is a Labyrinth?

The labyrinth is an ancient spiritual tool, used for the purpose of prayer, meditation, reflection, and contemplation. It is a universal image representing the path of life, and its winding walk in toward the center and out again symbolizes a pilgrim’s walk with God, a symbolic journey in the form of a walking meditation. Walking the path is a sacred ritual that can provide insight, courage, and understanding in facing life’s challenges.

The labyrinth is found in various forms in many religious traditions around the world and throughout history. The labyrinth is not a maze; there are no tricks to it, and no dead ends. The labyrinth has only one path which leads to the center and out again. If you make a misstep, you will simply end up at the center or at the beginning. The winding path of the labyrinth mirrors the way we live our lives – with twists and turns, ups and downs; it can touch sorrows and release joy. Walk it with an open heart and mind. 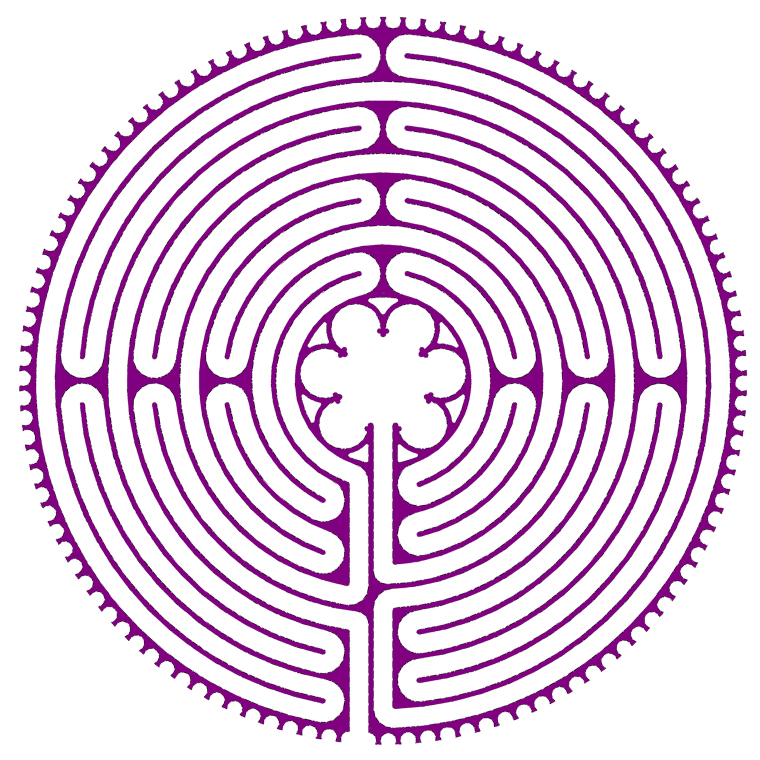 History of the Labyrinth

The labyrinth has been used as a spiritual tool by the Church for centuries, going as far back as the 12th Century. Throughout human history there has been the practice of making a spiritual pilgrimage – a search for the holy. The Hebrew Scriptures refer to God’s people journeying to a land of Promise, to Zion, to sacred places. The Psalms witness to this deep yearning within people. The first Christians were called “people of the Way,” as they tried to follow the path Jesus set before them.

In the Middle Ages, Christians were expected to travel the Holy Land at least once during their lives. As travel became too dangerous during the Crusades, certain cathedrals throughout Europe were designated as “pilgrimage cathedrals.” Christians would journey to those sites where they would make a prayer-walk of the labyrinth, laid in the cathedral’s stone floor, as a symbolic completion of their pilgrimage. This is why these labyrinths were sometimes called the “New Jerusalem.” Today, labyrinths are being used in churches, hospitals, retirement centers, parks, prisons, and in retreat and conference centers as we recover this sacred practice. The labyrinth appeals to all ages, from youth to senior citizens.

The canvas labyrinth at First Presbyterian Church (OKC) is an eleven-circuit design, an exact replica in size and shape of the labyrinth found in Chartres Cathedral in France.